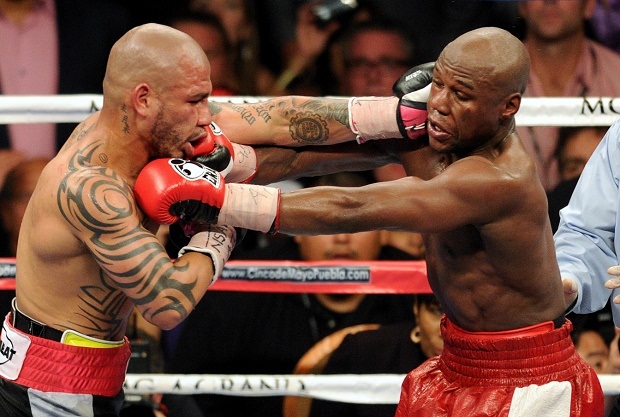 In what would turn out to be one of the most physically grueling altercations he’s been in, Floyd Mayweather met with Puerto Rican hero, Miguel Cotto inside the MGM Grand in Las Vegas, Nevada for Cotto’s WBA super world super welterweight title.

The normally very calculated and deliberate Mayweather fought Miguel Cotto somewhat uncharacteristically, opting to trade with the bigger man and stay in the center of the ring, rather than using his superior footwork to create distance.

In-fighting is Miguel Cotto’s game and soon the Boricua bomber was able to hurt Mayweather with both body punches and with his excellent jab; the undefeated star would taste his own blood midway through the hostilities.

The two champions continued to trade in the middle of the squared circle throughout the fight, both men marked and bruised, but still pushing forward past visible exhaustion. In the final round of action, Floyd Mayweather managed to finally find a home for his overhand right. After crashing three past the top of Miguel Cotto’s guard, Mayweather began incorporating a lethal uppercut that had his (now extremely bloody) opponent nearly collapsing to the canvas on several occasions.