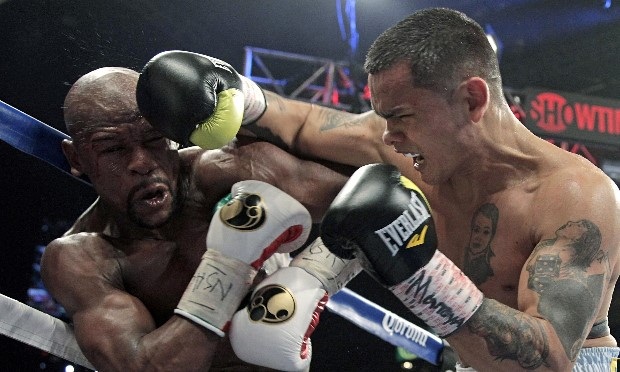 On the back of a dominant upset win over “baby bro” Adrien Broner, Marcos “El Chino” Maidana secured a lucrative shot at the sport’s pound-for-pound best. As a massive 12-to-1 favorite, many thought that Floyd Mayweather would likely encounter a few tense moments with the wild Argentine, but ultimately come away with a clean, relatively straightforward victory.

While Mayweather was skillfully countering and landing at a steady clip, Marcos Maidana was pressing the action at a breakneck pace. Nearly every minute of each round Maidana was throwing an unconventional selection of heavy-handed bombs.

In what would surely become the most foul-filled night of his career, Floyd Mayweather was kneed, tackled, headbutted and was the unfortunate recipient of a few jujitsu arm locks. That is not to say that he wasn’t letting his forearms and elbows painfully enforce distance, however.

When the dust settled at the tail of 12 rounds of chaos, both camps celebrated victory ahead of the official scorecards being revealed. A competitive, closer-than-expected majority decision in favor of Mayweather and a swell of pro-Maidana support from the Latino community sparked the need for an immediate rematch.